In many of the articles on this website I will explore different penny auction websites, find out how they work and expose their scams so you can stay informed and make an educated decision for yourself on whether you want to be part of this style of gambling… And if so, which sites you should stick to (however in general I recommend not even entering the slimy gamble world that is Penny Auctions)

But for now, on this page I will explain in general how these penny auctions work and how much it really costs to make bids.

Penny auction websites charge you to bid on items at a per-bid fee. The typical sign-up standard rate for bids is 60 cents per bid. Your initial sign up process will usually charge you a beginner user package at this ~60 cents per bid price (more on this below as it can confuse some people). Once you have a membership, you can also bid on “bid packs” or “bid vouchers”. Using bid packs, it is sort of possible to win bids for as low as 10 cents per bid, however, there is one key thing to remember…

THERE IS ONLY ONE WINNER PER AUCTION

Thats right, you just won that bid pack at a net price of 10 cents per bid, but for every winner there are 10+ people who just spent a lot of their money bidding who did not win anything in return, they simply threw their money away. Let’s take the following bid voucher penny auction as an example: 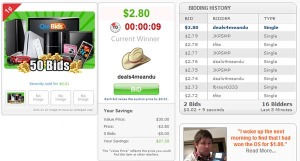 If someone were to enter this auction right now and win by placing only 1 bid, and would only pay $2.80 to win the 50 bid bid voucher, that would break down to a net cost of 5.6 cents per bid. Hey thats not too shabby is it? But the thing is, that will never happen. Let’s say he had won a previous bid pack for 10 cents per bid and it took him 20 bids to win this bid pack, now if they win the bid pack they will be out of pocket $4.80 and will have paid 9.6 cents per bid for each bid in the bid pack.

Now that doesn’t seem all that bad either does it, except theres a catch, the likely hood of winning after only 20 bids is extremely rare. There are 16 other bidders in this auction, and more people will enter it as they think the item will come to an end. You could be competing with over 20 people for this bid pack in the end, and who knows when anyone is going to throw in the towel. There have already been, in the picture above, 280 bids on that one bid pack and this thing is just getting started. Let’s say the people bidding have won their bids at a value of 25 cents per bid, these people together have spent $70 bidding on this thing, no one has won, and only one person will win after battling everyone else for hours. Yes, it is true that you could be the last one standing after only spending a few dollars worth of bids… But out of all the other people also in the auction, do you really think that is very likely?

Penny Auction style websites will tell you that you need to have a system in place that gives you an advantage, a theory that will allow you to be the last bidder… but everyone else you are bidding against is thinking the same thing.

OK so what if I turn my 80 bids I start with into 1000 bids by continuously winning bid vouchers using only my original bids? This is very possible is you are extremely lucky, but remember, there is fierce competition out there, people may be willing to pay higher than the cost of an item just so that they will not have wasted all their money on the penny auction with nothing to show for it. Some people are even trying to make a name for themselves by being fearless and never losing an auction so that they can intimidate other users from trying to compete in future auctions (sounds crazy doesn’t it? But it REALLY happens!).

Now that was fun, but what is the true cost of bidding on actual Penny Auction items, like those MacBooks and iPads people win for less that $50.00?

Well, let’s take this penny auction for an iPad as an example so see how it works. Retail, this iPad costs $499.00 (Funny they tell you this model’s value is 699 because it is really $499)… That is how much you could waltz into an apple store and pick one up for right now if you wanted to… Let’s break down this example auction and see how much people are really spending (this will reveal exactly why penny auction websites are capable of selling items so cheap): 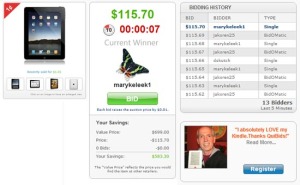 Now Keep in mind I started writing this report 8 hours ago and was hoping this auction would be done by now so I could give you the final costs. I guess I’ll get to that later because I want to keep writing. So far this auction has had 11570 bids!!! At a cost of 25 cents per bid people have already spent $2892.50 just bidding on the damn thing! Even at a super duper value of 10 cents per bid, people would still have spent $1157.

Now as things would have it, I watched this penny auction closely for about 10 minutes about 8 hours ago when the price was still at $30… There were relatively the same 8 people continuously bidding on this item thinking they would be the last ones… Heck under the picture it says the last iPad sold for $1.01.. This one already up to ~$30 should be ending soon right?… Yea right, that was 8 hours ago… And to people just entering the auction, $115 is still a bargain compared to $499 (or $699).

Now 8 hours later it appears all of those people have abandoned this auction as there is a new group of ~5 people continuously bidding on the item… Well save 1, lilili was still bidding way back and shes still here now. She has probably spent over $200 just bidding on this thing and i bet now she is shaking and sweating that she is about to waste all of that money if she doesnt win (Update: Ok now 10 hours later shes gone, must have run out of money)… Which brings me to another point…

Be Prepared To Shell Out As Much As Full Retail Value, At LEAST If You Are Serious About Winning The Item. 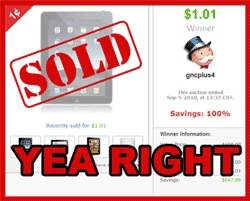 And that is just to get you a good chance of winning… Penny Auction websites do a great job of making your forget how much bidding really costs. All of these testimonials about how people won items for 1 penny, a dollar, some absurdly low price… But how many auctions did they lose before winning that one auction? How much money have they spent bidding in total before winning that one item? Sure the final auction cost was $1.00 but they may have spent $500 losing other auctions before finally winning one. It is really niece and narcissistic to think that for some reason you will be able to “out smart” everyone else bidding on these things every time to really save any real money.

If everyone was saving money, penny auction websites would make absolutely no money. The stories they tell about being able to sell items so cheap because of their high volume deals or police auctions are complete garbage. They buy these items at full retail price and sit back while people spend over $2,000 just bidding on a $500 item, and they go laughing all the way to the bank.

How can you be sure there are no “Bots” placing bids to extend the auctions?

Shill bidding could occur and you would have absolutely no idea. They could have their auction plug the current price and money spent on bids into a mathematical formula that keeps extending the auction until they have covered the price of the item, and then some... And there is absolutely no way to verify whether or not this is happening. How do you even know you are bidding against real people?

Penny auction websites will spend thousands of dollars every day attracting people to their websites through advertising. This is another cost that they need to cover by making people purchase more and more bids. Who’s to say that a particular penny auction websites isn’t run by a complete sleezeball who doesn’t want to spend much on advertising to attract bidders, and just uses bots to make it look like there are a lot of people who use the website… You can never really know, and the people running the penny auction website sure as heck are not trust worthy.

So I hope I have answered all of your questions about how penny auctions work. Now go off and make your own decision about if you really want to be part of this. It is easy to get drawn in because of your “chance” to win something so cheap… But your odds are very bad, you are playing against real people who may be VERY dedicated to making sure they win. 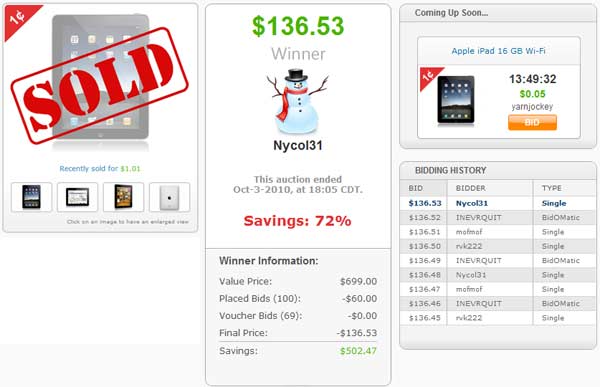 Do You Still Want To Try Out These Penny Auctions?